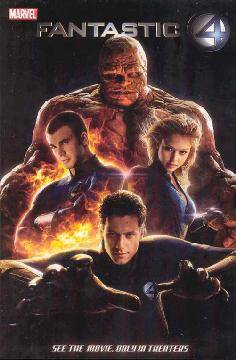 Description: The comic adaptation of the blockbuster motion picture starring Ioan Gruffudd, Michael Chiklis, Jessica Alba, Chris Evans and Julian McMahon, this collection captures all the cinematic excitement of the new hit movie - plus a selection of the classic stories that inspired the film! Forty years ago, writer Stan Lee and artist Jack Kirby created a team of adventurers like no other that had come before. Unlike previous groups of stone-jawed super heroes who got along perfectly in their pursuit of liberty and justice, the Fantastic Four bickered, argued and fought among themselves - just like a real family. Their continued adventures around the world, into outer space and throughout uncharted dimensions have pushed the limits of the Marvel Universe, consistently challenging readers' perceptions of what a comic book could be!