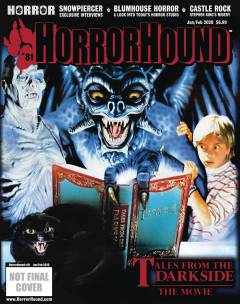 Description: 2020: The Stephen King and George Romero collaboration, Creepshow, has returned thanks to a new television series on Shudder. This issue takes a look back at this iconic duo's history, along with a special 30th anniversary retrospective feature on their 1990 feature film Tales from the Darkside, which most consider the 'lost' Creepshow sequel. A VHS Invasion on horror TV collections is also expected (including Tales from the Darkside: The Series). This issue also takes a look into the upcoming Snowpiercer television series with cast interviews and the latest film news from Blumhouse ... plus our regular features, such as toy and comic book news.