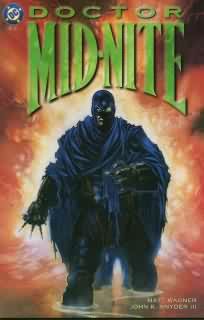 Description: Writer Matt Wagner (Mage) and painter John K. Snyder, III (Grendel) conclude the inaugural tale of the new Doctor Mid-Nite! In the battle to save Portsmouth from the Terrible Trio, our hero takes his fight to the stronghold of the enemy. Deep beneath the waves, Doctor Mid-Nite infiltrates the Shark's undersea base to stop the Shark, the Fox and the Vulture. But will his laser-keen intellect and arsenal of chemical weapons be enough against the Trio's army of steroid-enhanced zombies? It had better be, if the Doc's to prevent the rest of his beloved city from becoming just like his berserk foes! Look for Doctor Mid-Nite in the upcoming JSA monthly! FC, 48 PG. (3 OF 3) PRESTIGE FORMAT $5.95