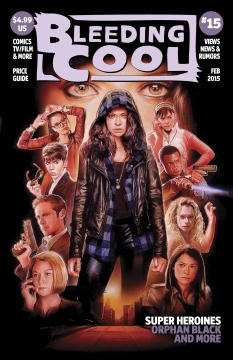 Description: 2015: With female heroes on the rise across genres, from horror titles to adventure stories, with new super-heroines emerging every day, BLEEDING COOL MAGAZINE will bring you the latest in girl power in comics and what female comic creators have to say about it. RICH JOHNSTON brings us the checkered insider history of women in comics, the way female heroes have been perceived over time, and the impact of the creator-owned movement and webcomics on the future of the medium. You'll also get your insider tips for investment and comics-collecting completism ranging from vintage books to the most recent released titles in our handy Price Guide. Delivering over 100 pages per issue on a bi-monthly release schedule, each issue of BLEEDING COOL MAGAZINE is overflowing with content, from first looks at upcoming titles to high-profile interviews, only to be found in our print edition.