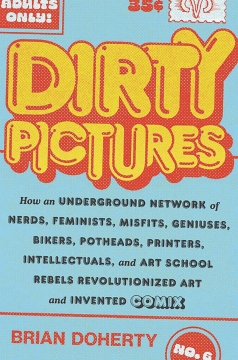 Description: 2022: In Dirty Pictures: How an Underground Network of Nerds, Feminists, Misfits, Geniuses, Bikers, Potheads, Printers, Intellectuals, and Art School Rebels Revolutionized Art and Invented Comix, author and journalist Brian Doherty tells the wild history of the outlaw, outsider, and sometimes illegal world of Underground Comix. This subterranean subgenre of comic strips and books was printed in lofts on out-of-date machinery, published in handbound zines and underground newspapers, and distributed in headshops, porno stores, and on street corners. Comix-spelled that way to distinguish the work from its dime-store superhero contemporaries-presented tales of illicit sex, casual drug use, and a transgressive view of American society that was embraced by hippies, the fine-art world, and legions of future creatives. With a narrative that weaves together the stories of Harvey Kurtzman, R. Crumb, Trina Robbins, Spain Rodriguez, and Art Spiegelman, among many others, Doherty details, in the first complete narrative history of this movement, the local scenes that sprang up in the 1960s and '70s in New York City, San Francisco, Los Angeles, Cleveland, and Chicago, and provides insight into the rivalries, ideological battles, and conflicts that flourished. The book begins with the artists' origin stories and follows them through major successes, including Spiegelman's Pulitzer Prize-winning Maus and Robbins's Wimmen's Comix, and tragedies, from S. Clay Wilson's spiral into alcohol abuse that resulted in career-ending brain damage to Crumb's neurotic running from his own success (and his use of controversial race and gender imagery), and ends with an examination of these creators' legacies. Dirty Pictures is the essential exploration of a truly American art form that recontextualized the way people thought about war, race, sex, gender, and expression.