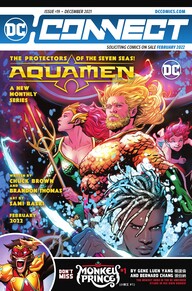 The protectors of the seven seas unite in Aquamen, a new series starring Arthur Curry and Jackson Hyde! But what’s at the heart of the explosive Atlantean conspiracy? The launches continue as DC Universe’s newest hero gets his own series from Gene Luen Yang and Bernard Chang, in Monkey Prince #1! Plus, Jace Fox relocates to New York City in I Am Batman #6, and the critically acclaimed team of Simon Spurrier and Aaron Campbell reunite for Suicide Squad: Blaze, a three-issue DC Black Label series sending Task Force X on a bizarre and brutal mission!