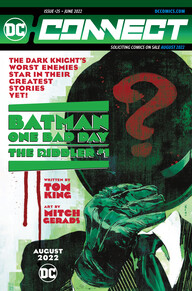 The Dark Knight’s greatest villains get their greatest stories yet in Batman – One Bad Day, a new series of one-shots, starting with a definitive Riddler tale from the superstar team of Tom King and Mitch Gerads! Speaking of the Dark Knight: acclaimed artist Lee Bermejo gathers his Batman covers into a narrative in the unique one-shot Batman: Dear Detective! What began as a battle for Earth becomes a war for the galaxy in Tom Taylor and Trevor Hairsine’s DCeased: War of the Undead Gods #1, the start of the epic final chapter in the massive DCeased franchise! Plus, Tai Pham’s story continues in Green Lantern: Alliance!